If asked today to list fashionable careers, it is highly unlikely that any of us would include ‘syphilis specialist’ in our list. During the eighteenth and nineteenth centuries the prevalence of the disease in British society and the ongoing debates surrounding its nature and cure provided many medical men with the opportunity to carve out very fashionable, and indeed lucrative, careers.

Among those who became famous for their work on the disease were two Scottish surgeons – John Hunter and Benjamin Bell. Hunter and Bell were particularly important and noted because they debated whether gonorrhea and syphilis were caused by the same pathogen.  Hunter argued for the same pathogen, whilst Bell took the position that they were separate diseases. Their work on the diseases was widely read and debated in the medical community, for instance Solomon Sawrey, a surgeon, published a book on An inquiry into some of the effects of the venereal poison on the human body; with… observations on some of the opinions of Mr. John Hunger and Mr. Benjamin Bell (1802).

The London-based surgeon John Marten also appears to have carved out a successful career as a pox practitioner (despite some accusations of quackery from contemporaries!). Marten published a very popular Treatise on all degrees and symptoms of the venereal disease. The book was clearly successful, running to seven editions. However, Marten did not just seek fame and fortune through his published endeavors. He also sought these through treating the upper circles of London society for the disease. The service that he offered was clearly tailored to meet the desires of an elite clientele; he offered to meet patients in clandestine locations away from their homes and his surgery and would send letters and remedies anonymously and to alternative collection addresses rather than directly to people’s homes. This was all to help fashionable Londoners maintain a respectable facade, free from association with a disease considered immoral and associated with horrific physical suffering and disfigurement. Moreover, all of these services were mentioned in Marten’s book, thus making it a sort of extended advertisement; a way to win him more wealthy patients! 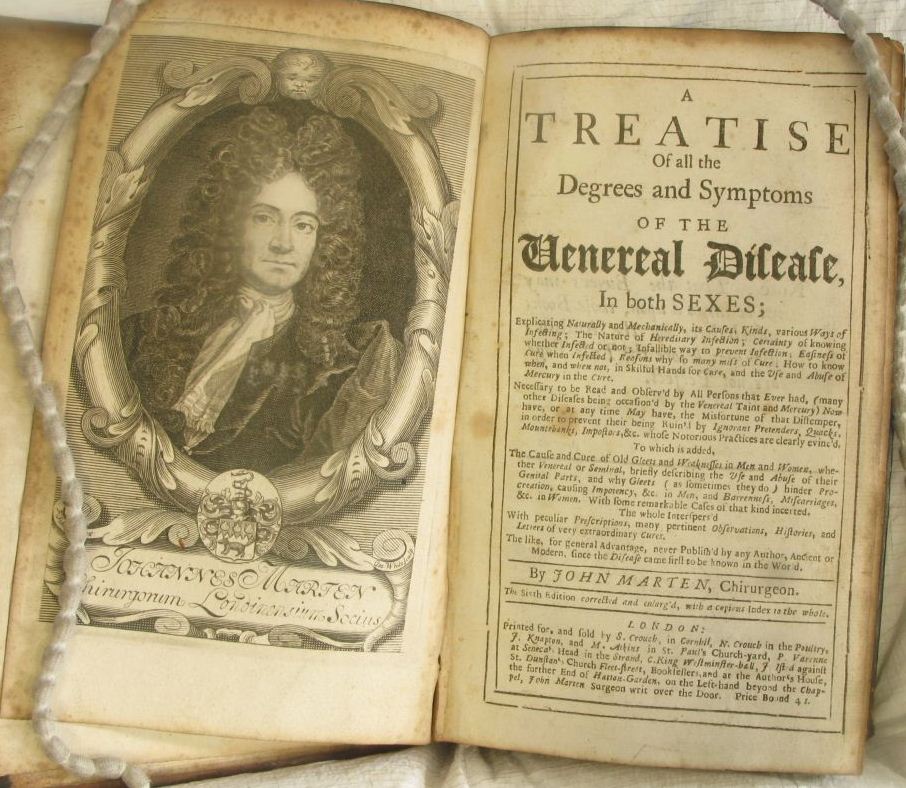 Today we sometimes say that something is ‘to die for’, well during the eighteenth century, a successful career as a practitioner treating the pox was just that. Self-experimentation was common among medical men during this period, and some injected themselves with material extracted from the sores of venereal patients. This was undoubtedly risky, it could result in the need for months of mercury treatment, and had the potential to prove fatal. There is at least one known case of a student, who was preparing a thesis on venereal disease, dying from injecting himself with material from a pox sore.

Thus, whilst the great pox was not a fashionable disease to suffer from during the eighteenth and nineteenth centuries, it provided many medical men with the opportunity to obtain fame and fortune. To be a pox practitioner, surgeon or doctor, was so desirable that it was literally seen as a career worth dying for.

Should you visit The Hunterian Museum you can come face to face with victims of the great pox (syphilis). As you enter the main museum from the staircase, to the left hand side, on the topmost shelf of a cabinet containing a series of human specimens there is a set of skulls showing the ravages of what is now known as tertiary syphilis, the disease’s most aggressive phase. 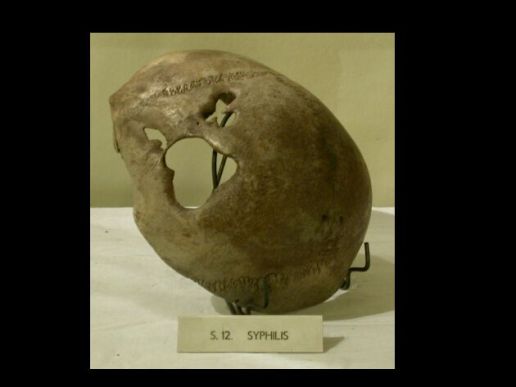 William Hunter, as is evident from the collection that he bequeathed to the University of Glasgow, was a voracious collector with incredibly diverse interests. But why did he collect these specimens?

Well, it seems these bones were principally objects of medical-scientific interest for Hunter. Perhaps he even used them in some of his teaching. In any case, neither these skulls nor the disease that they illustrate were Hunter’s primary interest. This is reflected in his catalogue of anatomical preparations. Some of the entries in this manuscript carefully document the origins (and sometimes even synopsise the life-stories) of human and animal specimens. However, no record is made of where the pox specimens were acquired from, and no clue is given to the victims’ identities.

We know very little of Hunter’s own perspective on the disease and its victims. In 1775 he gave a paper to the Royal Society in London, discussing the geographical origins of the disease. During this paper he suggested the pox was associated with ‘immorality’ and ‘disgrace’. However, it is unclear whether Hunter shared this opinion or was merely acknowledging contemporary attitudes.

But these skulls are not just ‘specimens’, they are human remains. They lived lives as vivid as our own. The holes in some of the skulls can look like the accident of a careless archaeologist. It is easy to forget when browsing in the museum, that these people watched, and likely suffered unimaginable pain, as the pox ate away their bones. These painful and emotional experiences cannot be captured by museum labels or catalogue descriptions.

One of the aims of this project, particularly through the Insight Talks I have delivered in The Hunterian, has been to ask museum visitors to consider how they view the objects and specimens on display. To acknowledge the scientific and medical importance of items like these skulls, but also to encourage viewers to consider these as emotional objects, which suggest a past that we cannot fully access. Ultimately, without documentation we cannot hope to discover the stories of these individuals, but through combining our knowledge of medical history, the attitudes towards and treatment of the pox, alongside our own emotional experiences of illness, we can give some flesh to these bones and see them not only as specimens, but as people.

A preserved skull of a woman who had been suffering from syphilis and encountered her ‘long wished for death’ on 28 August 1796. Credit: Wellcome Library, London.

These dreadful Apprehensions have frequently possesst the Imaginations of some People that had taken the way to get the Pox, so, as to be soon perswaded they have it, whether it be so or no.
John Marten, A Treatise of all the Degrees and Symptoms of the Venereal  Disease in Both Sexes (London, 1708), p.43.

In the Treatise of all the Degrees and Symptoms of the Venereal Disease by the London-based surgeon John Marten there is an intriguing and disturbing discussion of ‘hypochondriacal’ patients. These ‘hypochondriacal’ men and women were, firstly, those who although they were cured of the pox according to their doctors, believed that they were still afflicted with the disease. Secondly, this group included those who had never had the pox, but had read and heard about it, and had usually participated in behaviours (such as sexual intercouse with a prostitute) that were believed to pose a high risk of contracting the disease, that had become (wrongly) convinced that they were labouring under the disease’s symptoms.

The few pages on pox-related hypochondria in Marten’s book provide a sharp insight into the terror that this disease provoked in eighteenth-century British society. The picture of the skull from The Hunterian’s collection (above) very clearly demonstrates the impact the pox could have on the body in its most severe form. Perhaps some of the ‘hypochondriacal’ had witnessed others with this form of advanced pox, where the bones of the living victim begin to rot away. They may have seen such cases whilst they themselves were undergoing treatment, or possibly they had seen them on the streets or in the illustrations in the numerous books on the subject. The disease and its treatment were synonymous with suffering and loss of respectability (because of its association with immoral sexual behaviours). In other words, it could bring both literal (physical) and social death. For some, it appears that the threat of the disease or a relapse, were sufficient to cause severe anxiety which consumed their lives.

Marten’s book shows the pity he felt for these fear-ridden hypochondriacs, but it also reveals a sense of annoyance. His sympathy was driven by his intimate knowledge of the disease, having treated seemingly innumerable patients for the pox, some of whom died from the disease. He also recognised that the cures were often ‘desperate’, extremely painful and occasionally, when badly administered, fatal. To be afflicted with the pox was terrifying, and to undergo treatment was no less so.

Modern readers might compare these eighteenth-century pox patients with twenty-first century cancer patients, who suffer with their disease and often face courses of treatment which take a huge toll on the body and mind. Today, many of us will know someone who has undergone treatment for cancer, and the fear that lingers with many former patients and their families that the disease may one day return.

Sympathy, however, is not the only emotion that we encounter in Marten’s text. There is also a strong sense of frustration with the unwillingness or inability of the ‘hypochondriacal’ poxed to take his word, or that of other reputable medical practitioners, that their illness is cured or non-existent. That said, Marten’s exasperation seems to be primarily driven by the frustration of seeing patients leading themselves into ruination. Faced with a rejection of his professional experience and medical logic, Marten was rendered powerless, and could find no way to sooth the worries of his anxious patients.

Phobia of the pox led men and women to seek out the opinions of multiple medical practitioners, until they could find one that diagnosed them with the pox. But, according to Marten, ‘no fair skilful Practiser, will Administer any further than the Distemper truly requires, it being mercenary to make a Prey of those unfortunate Discontents’. Thus, their fear made them vulnerable to unscrupulous doctors, or worse still, quacks, men who pretended to have medical knowledge and/or qualifications and sold useless prescriptions or aped the cures of professionals as a money-making scam. Throughout the eighteenth-century quack remedies for all manner of illnesses often proved at best useless and, at worst, seriously harmful or fatal. Moreover, even where a proper cure for the pox (usually mercury) was administered, Marten warned that it damaged the patient’s health because it was unnecessary.

Moreover, once the hypochondriacs found a practitioner who agreed they were suffering with the pox their fear was also likely to intensify. Marten described how they became plagued with doubts surrounding the capability of the doctor or surgeon (quack or not) who had diagnosed and begun to treat them. The concern that ‘they were not in Hands skilful enough’ led them to seek out more medical men to treat them, and they bounced from one to the other with growing fear that they might never be cured. This erratic and self-destructive path, driven by intense fear, did not end Marten stated, ‘’til they had ruin’d both their Bodies and their Purses’ through the costly and unnecessary treatments. Not only was the pox potentially fatal, according to Marten the sheer fear of the disease could also ruin lives.

Whilst Marten mostly despairs at the illogical nature of the ‘hypochondriacal’ patients, their persistent intense fear and willingness to undergo huge financial and physical stresses to be rid of the disease they believed they had demonstrates just how great the fear surrounding the pox was in eighteenth-century Britain.